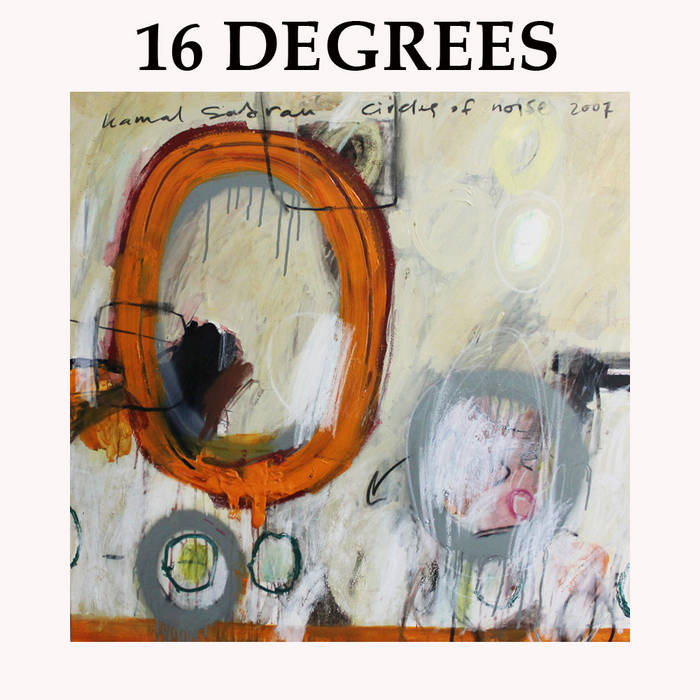 Many thanks to all the amazing artists who have contributed to this album. I’ve had the pleasure of working with many of you before. Our musical path into the future continues to be certain yet unknown. And what a treat it’s been to work with some of you for the very first time. I can’t wait to create even more music with you again.

I’m truly amazed at the variety of music here. By collaborating with me, not only have you inflated my ego, but together we’ve created sixteen very special pieces of audio art, each one unique in style and shape. I hope you all enjoy this album as much as I do.

Eric Hausmann creates a mix of songs with help from sixteen other musicians. Thus, 16 Degrees represents sixteen connections of musicians whose work Eric admired. The result is sixteen fabulous songs borne out of the creative intellect of various individuals ranging in genres from avant-garde, dance, ambient, Indian, experimental, house, trip-hop, and other urban and cosmopolitan origins. As a master of musical instruments, including the trumpet, violin, cello, guitar, drums, and sitar, it is no wonder Eric’s diverse musical tastes shine through on 16 Degrees.

“Tree of Id” opens with the hustle and bustle of a city with metallic noises and synth sounds. A drumming sound resembling tapping is superimposed over the traffic noise which cuts in and out. The song is more of an introduction than anything. Moreover, it is only one-and-a-half minutes long. “Penawar” is a Turkish avant-garde composition that opens with a lute that is quite similar to the Central Asian dutar. The music contains blurby electronics and a gong at different points, which make the song a rather global addition to Eric’s repertoire. The song is entirely instrumental and perfect in every way. The stringed lute playing resembles a song off the 1999 film score for American Beauty.

“Milanbound In The Rain” is a trippy, electronic drippy song with all the features of a great dub-step release and bossa nova origins. Bryan Baker is on vocals and offers a staticky voice to match the electronic undercurrents of the music. The song does have an electric guitar component amidst the trippy, electronic foundation. The vocals and musical arrangements create an almost grungy, urban, and classical composition with an indescribable set of sounds, tones, and melodies. The spoken word oratory by Marlina Hausmann on “How To Shoot A Deer,” is a relatively free-form composition recalling the proper etiquette instructions for shooting deer. The spoken word testimony is relatively graphic, but nevertheless relevant. The two-minute composition is backed by a jazzy, experimental rhythm that seems to echo part of Air’s soundtrack for the film, Virgin Suicides.

“Nemesis, Viewed By Tyche” is a South Asian-inspired electronic medley with droning sounds, tabla beats, and electronic, jazzy beats that propel the song into a jam session from Heaven. Hovering around five minutes in length, the song is an instrumental gem that does not try to overextend creative abilities or merge too many genres into one song. “Slight Unrest At The Pantheon Bar” opens with electronic sounds of air and what seems like reverberating cricket noises and electronic rasps. The musical concoctions are followed by crashing waves, electronic drones, and dark, brooding sounds with the occasional single-note guitar strums. A persistent whishing sound with louder claps reminiscent of a distant helicopter in-flight occurs during the latter half of the song.

“Memoir” begins with a distant electronic sound that is backed by an electronic, female voice. The electronic sound grows into the noise of a train on tracks, before the sound melds into dripping sounds, film-like mood music, and a few piano-type notes. The dark background sound of the train off-sets the female voice with a French accent. The varying rhythms are more experimental than other songs on the album. Despite this, the song is surprisingly scary with the lights out. It is suspenseful, scary, and intriguing. The odd “Callarobbie” almost sounds like the vegetable kohlrabi. The song is no vegetable, as the opening electronic tones suggests an urban,
scratchy, and DJ-driven song with a mix of dance, break-beat, and avant-garde. The noisy cascade of sounds is met with tabla percussion and slower, more meditative, sitar music with some nondescript vocals.

Eric Hausmann’s collaborations with sixteen diverse and talented musicians signify a worthy addition to the music world. A mix of global elements and urban noises are only part of the story. Eric’s efforts contain fairly different influences bordering on avant-garde, ambient, house, new age, dance, and experimental. Over one hour of music basically provides a lengthy introduction into the world of electronic music via an innovative collaborator. The negative aspects of 16 Degrees are relatively nonexistent, but the additions of some vocals break-up the flow of the album. The avant-garde spoken vocals tend to be too disparate from the electronic-focused compositions. Overall, 16 Degrees aims high and does not miss a beat or two.

Review by Matthew Forss
Rating: 4 stars (out of 5)

back cover photo by Marlina Hausmann