by Eric Hausmann with James Hill 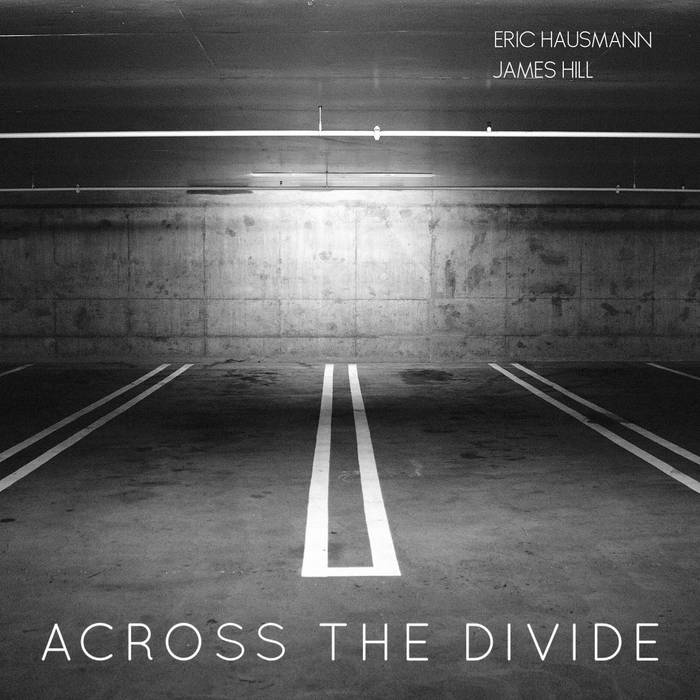 All selections composed by Eric Hausmann

Mixed and mastered by Eric Hausmann

Following the mesmerising presence of his previous single Dos Rayz, Eric Hausmann returns, accompanied by James Hill, to offer further spellbinding soundscapes in the form of a stunning full-length album entitled Across the Divide.

Beginning with the perfectly captivating title track, the music is the sort that overwhelms with atmospheric detail, as well as the sort would feel right at home on a Kill Bill soundtrack. Layering organic instrumentation, from acoustic guitars to trumpets, alongside of a lightly synth-driven ambiance, Hausmann delivers a fully immersive audio experience that is both dreamlike and skillfully expressive. Often times you get either the ambiance or the musicianship taking centre stage. In this case, both share the spotlight together, giving the project a gorgeous level of strength.

Eclecticism comes into play quite early on. Track two, Hallucinations Of Grandeur, is a spacious and distant, jazz-like piece, with a lightly melancholy tone. You move from the reasonably high energy of the opener – the live scene, the subtle chaos – to the slow and thoughtful walk home. As things progress, the detail increases, the mood lifts a little. Nothing is predictable here, yet every new moment seems to make perfect sense, and satisfy just as it should.

Shadowless Montana takes the logical next few steps, keeping the mood on par with what precedes it – these dreamlike, freely meandering melodies, floating out among a delicate backdrop. The guitar work here is stunning, the organic nature of the sound really draws your focus to the skill of the performances that have built this. Ecuador follows and presents a fitting vibe soaked initially in the somewhat traditional sounds associated with South America, evolving later to become something more manic, less focused – the peak of unshakable musical energy. Desert AM Radio continues the ambiance and keeps your mind in a similar zone, though there’s a definite vastness to it that allows certain moments of redirection, of concern and then clarity.

A touch of rhythm and classic jazz comes through with Petrol Men Of Silence, the leading melody has a certain characteristic that seems somewhat disconnected from the surrounding, rock-like arena. It’s striking to witness and draws your attention in a different way to what came before. The intensity grows, but it’s in a calming, last dance sort of way. After this, Do What You Love Before You Die hits with unstoppable weight. The piano part hypnotizes while the horn section energizes. The contrast works beautifully.

For The Road is a superb piece, whether the set-up of the project prior to this moment adds to the effect or not isn’t too clear, but personally I found my mind wandering off entirely at this point – along some pathway that silence or more common soundscapes don’t generally allow or encourage. The build- up is powerful and really works its magic increasingly as things move along. Toolbox Glitter makes for a wonderful a follow-up, the beat is brilliant, certain sound-bits give off a strange feeling of what is, I suppose, as close to the audio representation of toolbox glitter as possible. It’s subtle but grows to be mighty; the all-familiar, reverb-drenched rock guitar returns to weave those final moments of consideration around you.

Fainting Aunty takes a slightly more progressive or epic approach, a thick drum line accompanies a distant flicker of melody, a layer of distortion fills the spaces between. This has a slightly haunting aura, the swirl of the synths contrasts greatly with the lightness of the riffs intertwined elsewhere. It stands out in a lot of ways from everything else on the project. It feels like there’s a real story behind it that you’re a part of but uncertain as to the details. It’s dramatic and loud, and with the calming stillness of Don’t Ever Stop Painting afterwards, you really find time to absorb the mood. This penultimate piece offers elements of hope or optimism that reinforce that underlying sentiment – inspiring creativity and continued pursuits of passion.

The album comes to a close with the appropriately sun-setting energy
of Souvenirs. There are certain threads throughout this album that keep you contained within the experience; James Hill’s trumpet is one, Eric Hausmann’s musical craftsmanship or style of arrangement is another. This final track ends the process perfectly well, in my opinion. The overwhelming peacefulness of the audio, the way that it seems to stop time for you as you listen, allows you to really face up to the things that matter or the things that have been on your mind. It opens you up to hopefulness I think, and that’s a massive effect to have. Listen clearly for the full experience – head phones, good speakers, a long drive – less background music, more in the moment music.

Eric Hausmann with James Hill create a spellbinding, surreal sound with the cinematic “Across the Divide”. Featuring noir like jazz musings, the whole album has a shadowy aura behind it. Their restraint works in their favor, for by making sure to keep everything balanced the whole way the songs unfurl gives the album a stately grace. Over the course of the album Eric Hausmann with James Hill create a style reminiscent of Angelo Badalamenti’s and Brian Eno’s thoughtful work. Jazz nicely anchors the whole work, while elements of ambient, classical, and even rock come into the mix.

Opening up with the title track “Across the Divide” Eric Hausmann with James Hill start things off right, with an expansive approach that feels so gorgeous in its effortless charm. Much more hushed is the introspective “Hallucinations of Grandeur”. The careful keyboard work of “Ecuador” recalls the post-rock greats Rachel’s, letting the whole track build up methodically. A western twang comes into the mix on the soothing wash of “Petrol Men of Silence” for the guitars give the whole piece a dreamy hue. The heavy “For the Road” drives forward with steely determination, as the drums pound on with insistence. Continuing down this same path with a great number of twists and turns is the hard to pinpoint work of “Fainting Aunty” where things take on a woozy disposition, employing distortion to great effect. On “Souvenirs” the album comes to a lush, reflective close.

With “Across the Divide” Eric Hausmann with James Hill explore a darkened sense of beauty featuring shadowy fragments and incredible color.

James Hill records at his TCAB Studio, collaborating with composers from around the world.
tcabstudio.bandcamp.com
tcabstudio@gmail.com

Santiago Fradejas is a composer and instrumentalist, active in various experimental fields between noise, rock, jazz and contemporary classical music. He is the founding member of the Layma Azur ensemble.
www.laymaazur.com
santiagofradejas@gmail.com